Getting Called Fat…And why it’s the worst. 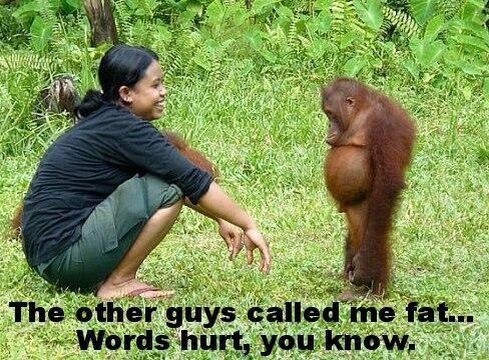 Some asshat on the soccer field called me fat last night.* Actually, here is exactly what he said:

On a normal night, I could have easily shrugged this off, maybe even laughed about it. And yet…

I’m doing this thing called The 21 Day Superhero Challenge. I won’t go into details, but for the past nine days, I’ve worked unbelievably hard to train and eat well. I also started CrossFit a little over a month ago after six years of trying and failing to keep my college level of fitness.

Last night, after a super intense workout, I went to my soccer game and realized that we had no women subs. That meant I would have to play 44 minutes straight.

That would have been super tiring to me six years ago, let alone now. But I knew that I was fitter than I was last month so I went into it optimistically.

The other team had three guys that were FAST. Comically fast. And their ball skills were unreal. I was genuinely impressed. My only option to get the ball was to reach for it. And I missed most of the time. The asshat was right: I couldn’t stop him. He was wrong about a couple things though: that I tripped him on purpose and that I’m fat.

For those of you who haven’t met me in person, I’m not fat. I’m relatively small, with an athletic frame that has packed on a few pounds since my days of competitive soccer. Chubby might be accurate some days, and some days it’s a stretch. I would put myself on the thinnish side of things.

But ladies, whether you’re a size 000 (yep, that’s a thing now) or a size 22, am I right that it doesn’t matter how many people tell you that you haven’t gained weight, that you don’t look pudgy, that you are in fact looking good—all it takes is one comment to completely unravel you?

Maybe I missed the boat on overconfidence, but man did that comment just crush me. It was so unexpected, so out of place on the soccer field, so mean. After the game, I walked up to him and said,

“I’m sorry, did you call me fat when you fell earlier?”

And he looked up, shocked that I said something. Then he replied,

“Yeah, but didn’t you try to trip me? Wasn’t that intentional?”

He was yelling. And trying to justify himself. I never raised my voice. I just had to ask. I had to know that the comment that rang in my ears for the last 18 minutes was something someone had actually said to me. And we chatted back and forth for a minute or two, me asking for an apology and telling him that he probably shouldn’t say such mean things to women, and him saying, “I’m sorry BUT…”

He looked to be about 17. And I wanted to punch him.

My [gracious, kind, loving, fatherly, GIANT] husband kept saying, “Man, it’s really terrible to say that to a woman. I understand you think she tripped you, but could you please just apologize to my wife?”

He couldn’t and the second we walked out of the arena, I sobbed. Like big, huge, can’t-catch-your-breath sobs. It just came over me.

I’m an intense person. When I’m into something, I’m really into it. My world becomes a little bit of a bubble and I am focused. Right now, that bubble is around fitness and eating well. But that bubble got burst and every single encouraging thing I’ve felt about myself in the last nine days just completely dissipated when he said that. Those thoughts were replaced with questions:

But I’ve had a few hours to calm down. And a good sleep.

I know I’m not fat. I know that we don’t all get to look like models AND be smart (joke!). I even know that getting upset about this comment really demonstrates my vanity.

But I realized last night that the reason I reacted so strongly was because my motives are exactly what they shouldn’t be: I’m doing this because I’m insecure. I’m doing all this work because I see photos posted of me and immediately think, “Good Lord, what happened to my face? Why are there so many chins? Is that what I look like now?” I’m thinking about how others see me, about how others think I should look.

The very premise of The 21 Day Superhero Challenge is to be your own superhero. No one else can do the hard work for you. The point is to be confident, strong and happy with yourself, on the days you excel and on the days you don’t.

For me, that is placing my identity where it belongs, my value in what is worthwhile, my priorities in order, and my heart on things not of this world. I refuse to give another thought to the small, small boy who called me fat.

Because I’m too busy being a superhero today.

*I am a Christian woman and I’m pretty sure my mother and mother-in-law both read this blog. But Patsy and Paula, you both have taught me to call a spade a spade, and an asshat and asshat. Actually, maybe LaVern taught me the second one.

An addendum: The very next week after writing this post, I happened to see this guy at the soccer stadium again. He approached me, apologizing profusely for the “piggish” comment he made. He was truly sorry and said that he couldn’t stop thinking about it. I must renege on my name-calling and say, thank you for not being an asshat.