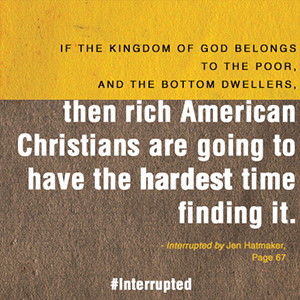 A few weekends ago, I got an email from Jen Hatmaker. Well, me and the thousands of other people that signed up to get her emails.

She is re-releasing her book, Interrupted. I read somewhere that this is the book of her heart, but she didn’t have as much readership when it was released the first time. Her book 7 was the one that got her all these crazy fans.

So I signed up to receive the book in the mail in exchange for a review. It came last week sometime and I put down the other eight books I was reading to give it my full attention.

I read for four hours. I think I cancelled plans to stay in to read it. My husband came home from a late meeting and I went on and on about how we’re doing it all wrong. Life and church and serving. The conversation continued through pajama-changing, teeth brushing and snuggling. I don’t think he said much.

So I laid my little head down to sleep and woke up about four hours later covered in hives. Stress ones. You see, when my brain can’t keep up with my emotions, I get stress hives. Thanks, Jen.

Sitting on the bathroom floor, trying to cool off and not itch my entire body at 3:00 a.m., I realized the hives were good ones. Almost a call to attention. I read a ton, I talk a lot and I get hyped up about new concepts and ideas on a daily basis. Sometimes my body needs to give me a physical awakening so my brain can say, “Hey…are you really absorbing the importance of this?” I was, and I am.

We go to an extremely social justice oriented church. (I have no idea where or how many hyphens are supposed to go in that previous sentence. So we’re going to skip them.) This, coupled with my crippling fear of saying no and my equally annoying, insatiable desire to be liked means that I do a lot of stuff. Lots of meal making, babysitting, ride giving, and so, so many BBQs/meetings/potlucks/community meals/etc.

But you know who I do it for? The other people that look and live like me. People who can “pay me back.” I’ve been concerned with one thing for the last three years since moving to Denver: making friends. And now that I have them, I just keep acting like I need to do things for them to keep them. Which just isn’t true. It isn’t fair to them or to our relationship.

The thing that gave me stress hives? (If you’ll open your book to page 103…) Jen discusses Matthew 25. You know, the one about feeding the hungry, inviting the stranger in and clothing him. She says, “The blessed and the lost will be separated based on one principle: the care of the oppressed. The end.”

Priorities man. They are a bummer. Later in the book, she writes, “I worry the Christian community has accepted an insidious shift from laboring for others to prioritizing our own rights…We’ve bought the lie that connecting with people on their terms is somehow compromising.” She is talking about how we want to serve people our way, on our terms. We can’t connect with people if they don’t share our values or moral code. As if people don’t deserve our help/attention unless they pray/dress/live in a way we agree with.

But that’s just not true! It’s not our job to decide who deserves love. Food. Shelter. Clothing. Joy. If we have this thing, this God, who we are so convinced is the only way, who are we to deprive people of that joy? Who are we to say who God chooses? Who He wants to bless?

This is getting super long and I’m so sorry about that. But it’s just really good stuff. If you’ve read 7, then this book really drives that whole experiment home. It’s like the amazing precursor. Where 7 is funny and interesting, Interrupted is convicting and thought-provoking.

What is my call to action? Two things:

No joke. My friend Alexxa came over the other night and I tried on every piece of clothing I owned. It took two hours because I own that much crap. We bagged up SIXTY SIX articles of clothing that I never wear/don’t need/are from the 90’s. It was embarrassing. Exhibit A:

Back to the book.

This book is worth your time. In a world with a lot of noise and convoluted messaging, this is simple, straightforward truth.

Oh, and listen to this. Jen is giving me and all seven of you reading this some special promotional pricing until midnight tonight! Get 20% off Interrupted if you order is through NavPress.com. Very cool. Order it.

A question from Jen’s mouth:

“What would you struggle to give up if Jesus wanted to use your life to make a difference in the world?

Answer below in the comments!

Other good stuffWriting…My philosophy.
More good stuffThe Janzs…All 8 or 9 of them.