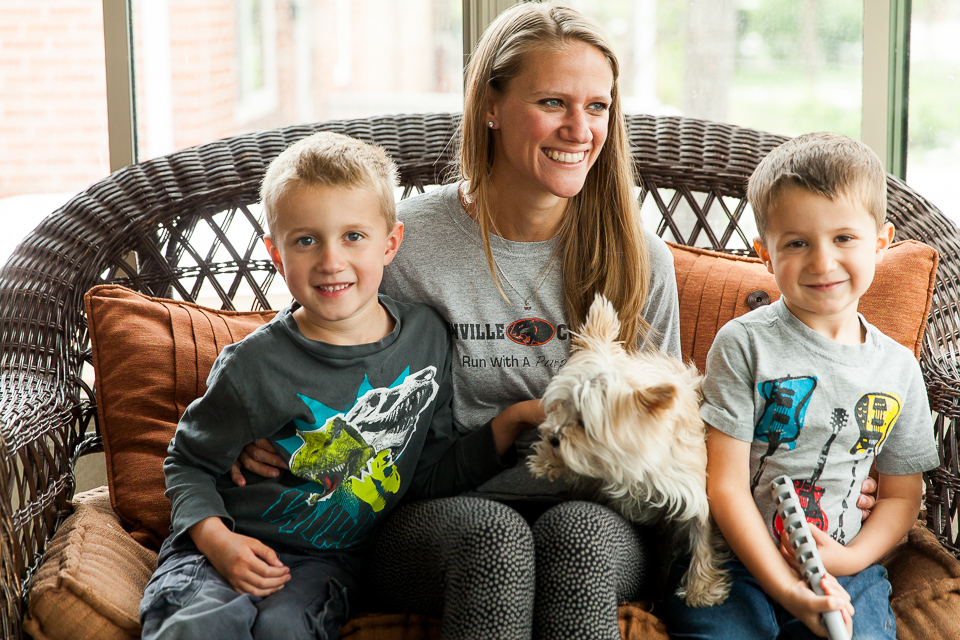 Holly and I became friends because of marshmallows. We went to the same church and I had been trying to figure out how to be friends with her for a while. It’s weird to make friends as an adult. It feels an awful lot like dating. You don’t want to come on too strong in case you weird a girl out, but you also don’t get to hang out with people unless you just kind of insert yourself into their circle.

A little more than two years ago, Holly had her youngest son Bryce (he was napping when we took the photo above). I saw it as my chance to buffalo my way into Holly’s life. Walking that fine line of nice and creepy, I decided taking her a meal was a bit much because I didn’t really know her that well, but I could definitely take her dessert.

I asked a mutual friend what her favorite dessert was and it was marshmallows. So I looked up some crazy Pinterest recipe and I bought those giant marshmallows and stuffed them with lots of chocolate and candy. I delivered them to her and she was just so nice. She invited me in, let me hold her new baby, and told me we should hang out.

I didn’t want to get too excited, but I totally was. And she meant it! She started hanging out with me! It was a time of my life that I was so desperate for friendship and she’ll never know how much I needed her. (The “we” in this next sentence includes Holly, myself, our friend Kelli, and a little later, our friend Sherice.)

We would go on long, late-night runs and eat freezy-pops; we initiated Sunday Night Church on Holly’s front porch; we started a book club and drank wine … Holly, her husband Josh, and their kids became my Colorado crew. I missed my family so deeply through that season of my life. I was buying a house and starting my own company—I wanted to be known and supported. I especially ached to be with my nieces and nephews but Holly’s boys filled that hole a little bit more each week. Holly (and the other girls) never took offense to me being homesick but made every effort to make Colorado feel like home, like I had people here.

And now I do! They are my people. They are a reason that when I’m back in Pennsylvania for too long, I want to head back to Denver.

Enough about me. Why did I creep on Holly so long? Wanting to be her friend? She is one of those people who you can just tell, even from afar, is very assured. When you do get to know her, you find that she is—she’s assured in her faith, assured in her own strengths and weaknesses, and her beliefs. It’s not over-confidence, just boldness in her actions. I know she probably will laugh reading this, as she is constantly searching for answers and seeking more wisdom, but I know that the tenants of her character never change. She lives with conviction. Though she is assured, her heart is so open to other opinions and she always advocates for those whose voices aren’t usually heard. She has an incredibly strong sense of justice that always makes me look at both sides of an issue.

As a mother? She is amazing. She has three crazy little boys and her patience and love for them is so fun to watch. Those boys have fun on a daily basis and Holly doesn’t stop their energy, she joins them in it. I stop by their house a lot. Sometimes she’ll be unloading the dishwasher and Bryce will be standing on it giggling. Sometimes she’ll be chasing the older boys who are dressed in superhero costumes or on the ground playing with them. I’m not really sure where she finds the energy as she teaches Spanish part-time, attends grad school full-time, and hosts our small group every week. But she does. And she doesn’t complain. She just does it.

We recently celebrated Holly finishing her first year of grad school and it really made me take a hard look at all she does on a daily basis. She’s the kind of mom that is living an inspiring story for her boys to look up to. She is setting an example for them that they aren’t even aware of yet. I can’t wait to watch them grow and begin to understand the strength in their mother. (Josh, you got a good one. Thank you for sharing her with me.)