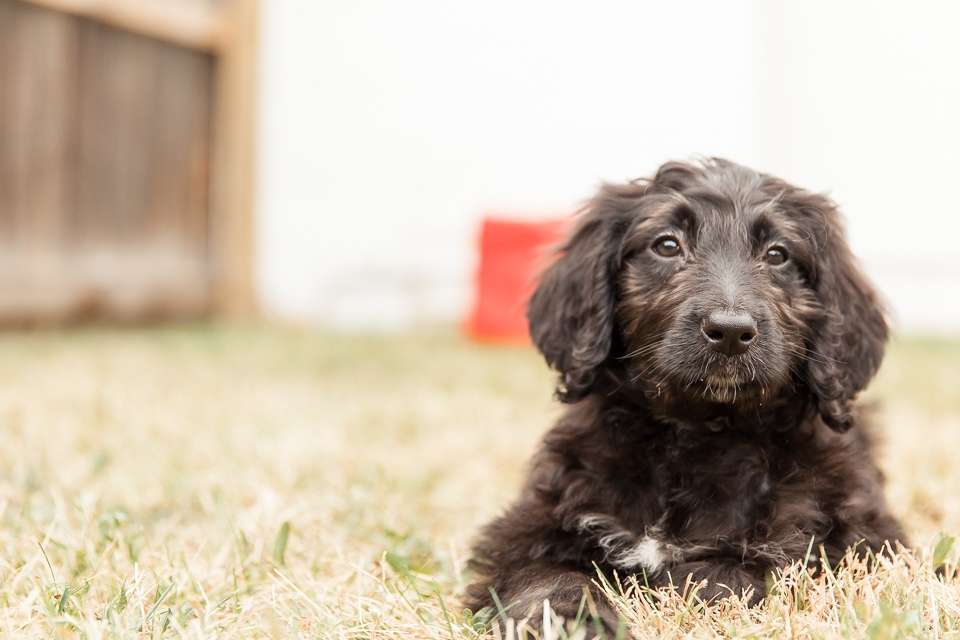 So I’ve been lying through my teeth to my husband for the past few months. I lost count after lie #103 and that was at least two months ago.

They were good lies though! Worthy ones. Because I bought him a puppy.

When I told people that I bought him a puppy, they all said the same thing. “That’s kind of a big deal. Are you sure he wants one?” And I was more than 100% sure. He’s been begging for one ever since we got engaged. Not only did I know that he wanted one, I knew what kind he wanted and the name he would choose. Wife points peeps.

I myself am not a dog person. At all. Ask anyone. I didn’t grow up with pets. We had a dog once that was pretty evil. He was put down because he was too vicious. I’m serious. So this is my history with dogs. I just never understood them. Why would I add something into my life that smells, costs money, and will take up a lot of my time?

Because they’re the cutest. I’ve had Bernadette the bernedoodle for less than 24 hours and I’ve cleaned up lots of poop and I still love her. I can’t explain it. I’m converted. I’m a dog person.

But I didn’t know I would feel this way so this gift felt like a huge sacrifice for me. But it all kinda hit me a few months ago. Travis has done absolutely everything in his human power to give me an incredible life here in Colorado. He pushes his own social boundaries constantly to make sure my incessant need of human connection is always met. He let me quit my job and lose a salary to pursue my dream. He lets me spend his hard-earned money on things that are purely for me. These don’t even scratch the surface of what he’s done.

And I realized, “If this guy was single, he would’ve bought a puppy. Five years ago.” And I had this huge wave of guilt rush over me and I felt like the worst wife ever so I started researching dogs immediately. 16 calls later to breeders all over the country, I found Highfalutin Furry Babies and I was sold. (Best name ever, right?)

Here was the thing, this puppy was a Christmas present and a surprise and she was going to come to Colorado at the end of September. I had to get creative.

So I naturally started planning a huge Christmas party. For September 30th. Duh.

So last night 35 of our friends and family came over to help us welcome Bernadette. I had sugar cookies and cider and cheeseballs and they all dressed in red and green. Trav walked through the door and everyone yelled “Merry Christmas!” which was very confusing as I’m sure you can imagine.

Then I took him out back to a perfectly wrapped little present that kept moving. And then he met Bernadette! There were lots of kisses and snuggles and now we are eyeball deep in training and loving and all sorts of fun new smells.

So as to not overload this site or my personal Facebook and Instagram accounts with our precious new addition, Bernadette has her very own Instagram: @dettethedood. And she would love to be your friend!

We’ll just be over here for the next few weeks talking in the worst kinds of baby voices. Pardon us.