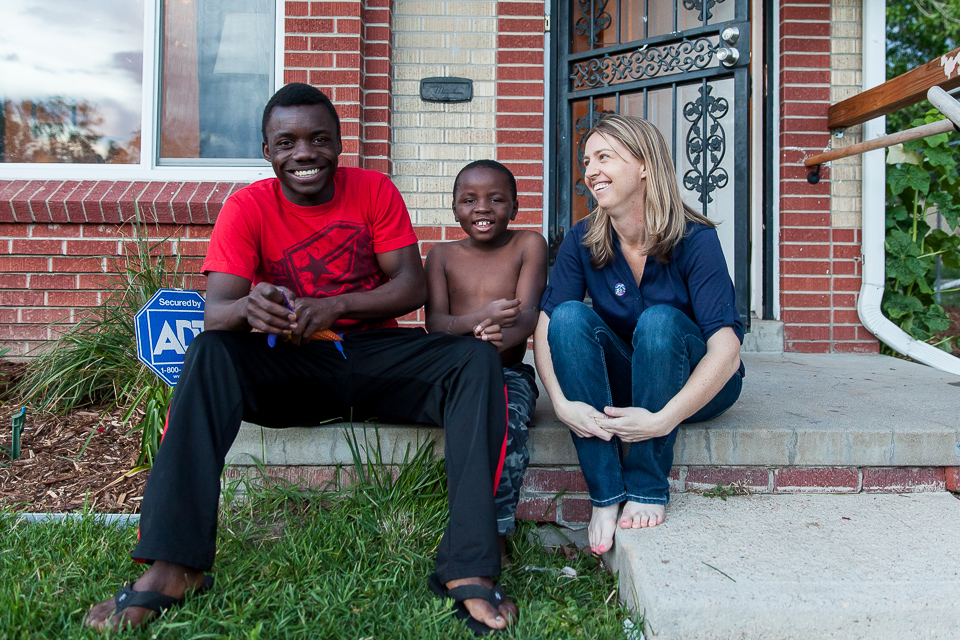 A little more than two years ago, Kelli heard from a little birdie that I didn’t have many friends at church. And she called me. I don’t remember what she said or what we did or how our friendship developed, but I distinctly remember her effort. It meant the world to me. And with Kelli came more friends (See here and here.)

As a social worker, Kelli knew a lot about the large refugee population in Denver. And then she went to Uganda years ago and fell in love with the people she met. But that trip confirmed for her that she didn’t need to move overseas to work with African people. She thought that maybe she would like to be a foster parent to child refugees someday.

And then she decided she would start the process to become certified. And then she waited a while. And then … she got a call. There was a Congolese teenager moving from a refugee camp and coming to Denver with his sister. She was old enough to live on her own, but he was not. Kelli said the most courageous yes possible: she would be a mother to him. She had a full-time job, lived with friends in a home that she owned and had a generally undisrupted life. But that yes changed everything and within a few weeks, she had a son.

While most moms have years with their kids before they become teenagers, Kelli and James didn’t have that luxury. And at times, they were both clunky (read: frustrated and in tears). But they both pushed through and three years later, they have formed this amazing relationship. Sure, there are still clunky times, but they are fewer and further between.

See the other little guy? Well, let me tell you about this smiley wonder …

After James came, Kelli would get calls from time to time about other refugee kids that were looking for homes. But she never felt that feeling she had when she said yes to James. It never felt right. She couldn’t explain it—she just never settled on the idea. But early last year, she heard about a little guy who lived in a hospital for months. She did something she never thought to do when the other calls came: she googled him. His name and the hospital he was at. And she saw that smile you see up in that photo. A little boy full of joy.

She showed me that photo one afternoon, before she decided to say yes. And the look on her face told me that she was already that boy’s mama. He came home a few months after that.

There is no other word to describe Kelli’s mothering than fearless. She would laugh and tell you that she’s scared all the time, or at least that she questions herself, but I’ve watched that woman walk into the darkness and come out still swinging. She is equal parts fighter and lover for her boys. She is their biggest advocate, fiercest encourager, and gentle admonisher.

When I tell people about my friend Kelli, “You know, the one with the African sons,” they always meet the statement with, “Wow, she sounds so incredible.” And she is! Her life is as impressive as it sounds. She has created a family in spite of no blood relation. Kelli has her sons living with her, as well as James’ sister and her two-year-old son. I walked into their home last night to take a photo and there was laughter, and yelling, and playing, and a pillow fight happening. It was the most familial scene I could think of.

If Kelli hadn’t been fearless three years ago, who knows where these boys would be? Who knows the life Kelli would have missed? Sometimes her entire house smells like small fish. And sometimes she is 5th in line for the bathroom. And sometimes she has to listen to African music videos playing on YouTube for hours at a time.

But then, some other times, her teenager will come give her a hug for no reason. Or text her “Happy Mother’s Day” at midnight. Or her eight-year-old will snuggle with her at night while she reads to him and ask her a million “Would you rather?” questions.

I hope to one day be as fearless as Kelli. The joy that surrounds her was a choice. And watching Kelli’s family is a constant reminder that making the choice to do hard things yields the best kind of life.