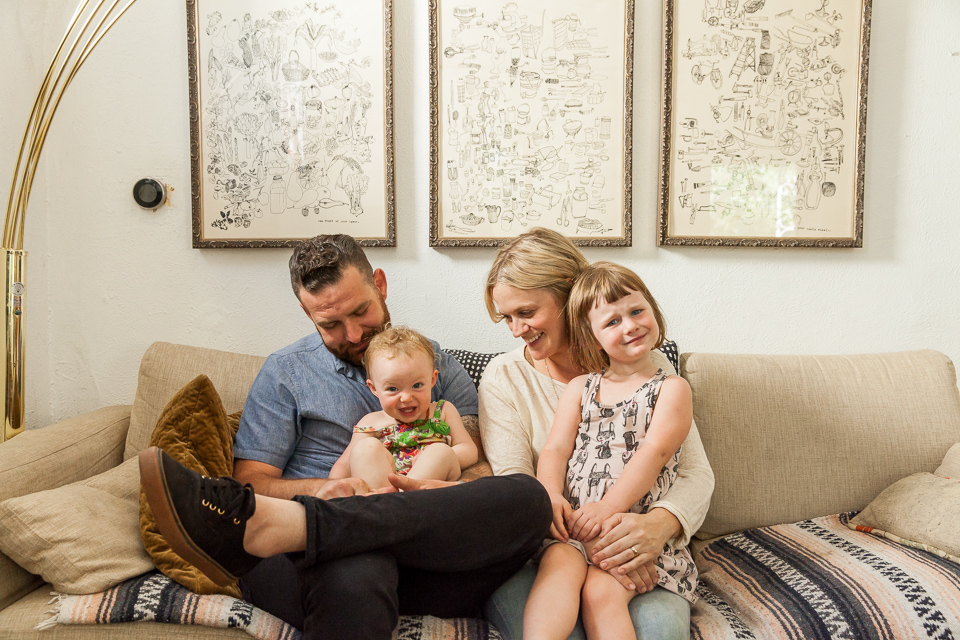 I first met this adorable family while shooting an assignment for Eater Denver for Father’s Day. Jonathan was one of the chef dads we were featuring so he brought along his two daughters, Ramona and Harriet, and his wife Emily. And the second they walked in that room, I was their number one fan.

Harriet literally stomped when she walked—not in an obstinate way, but in an authoritative one. Ramona was shy at first, but all smiles from the beginning. As they warmed up to me and the camera, their goofiness started to shine through and I couldn’t stop laughing. My interaction with all four of them was very brief, but there was something about them that made me make a mental note.

Fast forward eight weeks to the retreat I went to for documentary family photography. We learned that we all should have a muse or an ongoing project that inspires us. We also learned that we should photograph only in the style we want to attract, not simply what pays the bills. On that retreat, I couldn’t stop thinking about the Power family and the light that the girls brought into a room. I made a decision to reach out and ask if I could follow them around for a day.

I had no idea how much I would enjoy this. And the truth is, it was so much more rewarding than the portrait work I’ve been doing for years. I’ve talked about that before, so I won’t get into it again. But I do want to tell you what I learned about this family…

Emily is a mom who just says yes. She doesn’t hover to wipe dirt off of a freshly laundered outfit. She doesn’t say, “No, how about these shoes instead?” or “Let’s not sit in the chicken poop,” or even “Don’t touch that dead bug.” She has given her girls a world to explore with reckless abandon and I was so unbelievably impressed by that. Something I’ve noticed about moms since becoming a family photographer: it’s much harder to say yes than it is to say no. Saying yes means a bigger mess to clean, higher risk for your kids, and more of your time. Saying yes is the trademark of a mom who sacrifices for her kids on the daily.

Jonathan is a dad who works really hard. And that sentence is a huge understatement. He owns a few [extremely] popular and busy restaurants here in Denver, but I could easily see how engaged he was as a father. He clearly makes the most of his time with the girls and prioritizes them amidst a very hectic schedule. There was such a tender moment when they were talking about the plans for the rest of the day and Emily said softly, “Hey, I thought we could have a little family time this afternoon.” And Jonathan didn’t hesitate to say, “Yeah, of course.”

They strike me as a couple who communicates and compromises and their parenting shows both of those often elusive traits. The girls respect them both immensely and draw them into their adventures. Their daughters look at them both with such admiration that it made me see why people create little humans. Jonathan and Emily, you’re doing such an excellent job.

As for Ramona and Harriet … Ramona is as goofy as she is sensitive. Harriet as boisterous as she is skeptical. I’ve never seen a one-year-old with so much personality. They are wildly curious and I don’t think there is a better thing to be at those ages. Harriet loves coffee and Ramona is more articulate than some of my adult friends. I can’t even begin to explain to you how much I enjoyed my morning with them.

This is a really long blog post with a lot of photos … but I don’t really feel bad about it. There are a lot more of Ramona because Harriet took a nap during our session. But again, the point of photographing like this is to accurately represent a day in their life and I think this does. Thanks for sticking with me until the end. And once again, thank you Powers for inviting this stranger into your home and allowing me to see the real life you live.

(This shoot was my Best Morning Ever option, which means I photographed this sweet family for 6 hours. I offer these sessions to clients who live anywhere, even outside of Colorado. I would LOVE to chat with you about your family’s Best Day Ever.)